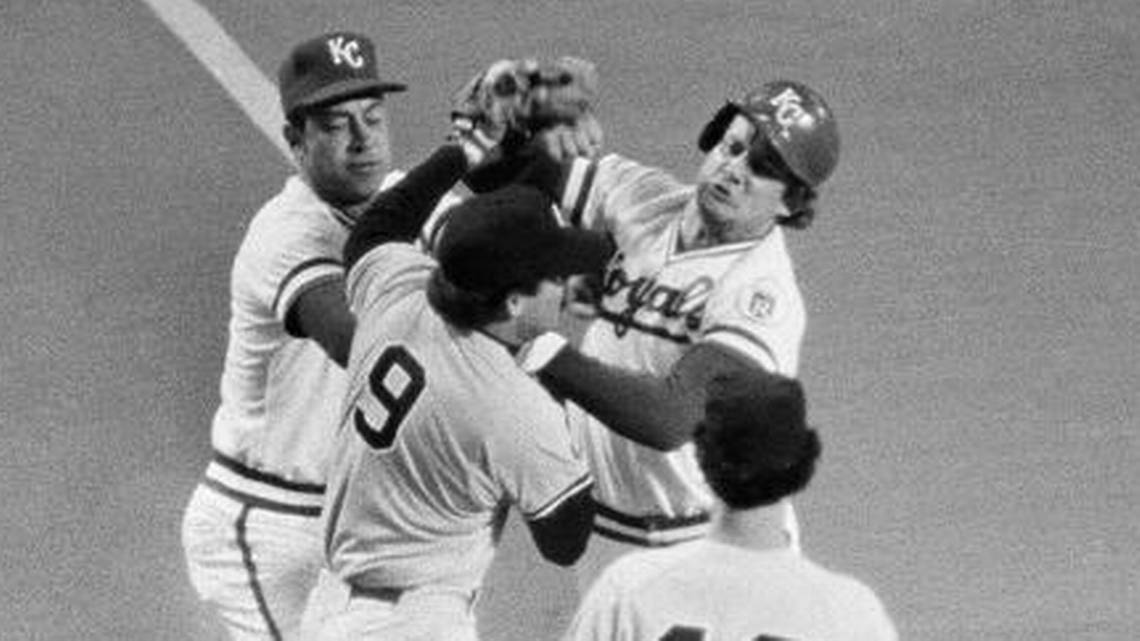 I remember watching this when it happened. Game 5 of the 1977 ALCS between the Royals and the Yankees. In the bottom of the first Brett hit a triple with Hal McRae on first. It went over the head of Mickey Rivers and Brett slid in at 3rd base and got in tangled with Graig Nettles…Nettles did a dirty kick to the face of Brett and George came up swinging.

Everyone got in on the action including pitcher Ron Guidry and then Thurman Munson came over. Thurman had seen Nettles kick Brett in the face and although Nettles was a teammate…Munson’s sense of fair play took over.

Thurman gets into the pile and covers Brett and sticks his glove over Brett’s head to avoid any cheap shots. George Brett said Munson told him:  “Don’t worry, George, I won’t let anybody hit you when you’re down.” And they didn’t. “Thurman is my hero.” This quote surprised me quite a bit since Thurman was known to be crusty at the best of times.

Yankee manager Billy Martin, no stranger to fights, wrapped an arm around the 5’5″ Royal shortstop Freddie Patek and pulled him from the fracas. Billy said to him, “Stay with me over here and we won’t get hurt. Let those guys sort it out.

The reason this fight stuck with me all of these years is because no one got ejected… there were no warnings. Everyone brushed themselves off and played the rest of the game like nothing happened…the Yankees won 5-3 and advanced to the World Series where they beat the Dodgers.