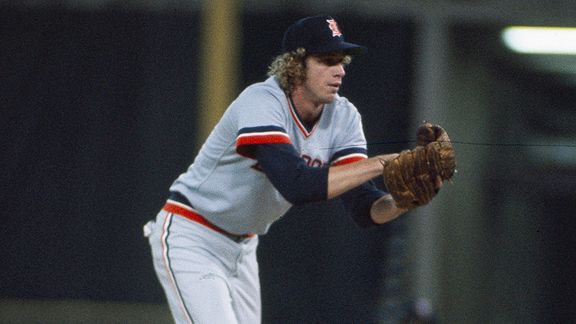 I didn’t start following baseball heavily until 1977. I do remember Detroit Tiger Mark Fidrych well though. Once in a while there will be a player that fans want to see no matter what team he plays for at the time. There are a few that come to mind. Fernando Valenzuela, Bo Jackson, and to a lesser extent Yasiel Puig in his rookie year. We want to see them because they have strong personalities and are usually good to great players.

Mark Fidrych was a joy to watch. He would look like he was talking to the ball, do ground maintenance on the mound, and would congratulate teammates for making routine plays. It was so much fun to see his obvious excitement playing Major League baseball. MLB estimated that in 1976 the 21 year old drew in over `1 million extra attendance across the league. Teams would ask the Tigers if they would change their rotation so Fidrych would pitch in their park to spike their attendance. Can you imagine that happening today?

His nickname “The Bird” came from his blonde thick curly hair and his big feet resembling to Sesame Street’s Big Bird. Fidrych was great in his rookie year. His record was 19-9 with an ERA of 2.34 and he pitched an incredible 250.1 innings with 24 complete games! He didn’t pitch his first game until May 15 that year. That makes it more impressive.

He injured his knee in Spring Training the next year in 1977. He recovered and was doing great until July 4 against the Orioles he felt his arm go dead. He ended up only pitching 81 innings in 1977 and was 6-4 with a 2.89 ERA. He tried pitching through what he could but missed a lot of time…he was out of baseball by 1980.

It was a rotator cuff injury that wasn’t properly diagnosed until 1985 when he was 31 because of medical advancement. There was too much damage already done to his shoulder that prevented him from coming back.

Some teams didn’t like his antics. The Yankees thought he was showing them up but teammate Rusty Staub said “It’s no act. There’s nothing contrived about him and that’s what makes him a beautiful person.” I think that is the reason people did like him so much…he seemed real and was having the time of his life playing baseball.

Fidrych went back home to Northboro, Massachusetts, where he became a licensed commercial truck driver and later purchased a farm. He married his wife, Ann, in 1986, and they had a daughter, Jessica. He made appearances for charity groups and nonprofit organizations over the years, making himself rather accessible to fans who fondly remembered the career of the Bird. Tragically, Fidrych died on April 13, 2009, at age 54, in an accident as he worked underneath a truck.

Baseball needs players like Fidrych…who are genuine and appreciate being a grownup playing a game.